We just "Keep on Keeping on". 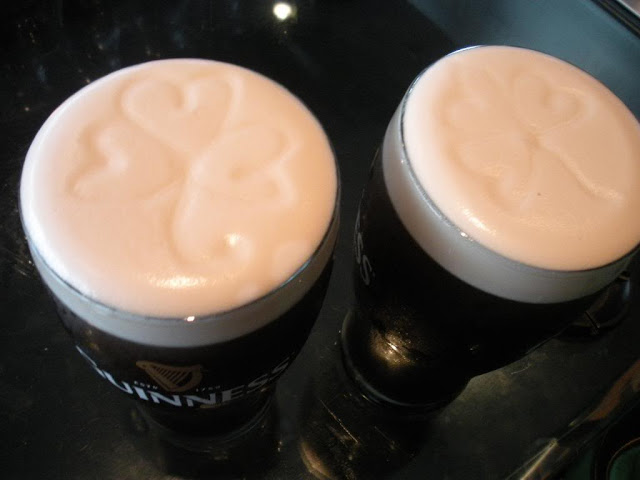 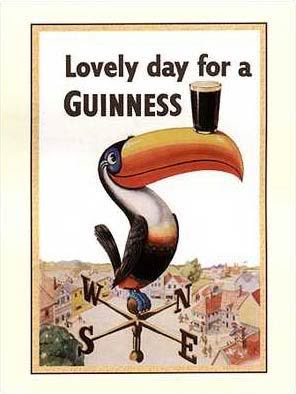 We finally finished the dinette, saloon cushions last week and while waiting for the sunbrella material to come for the skirting up on the flybridge, we decided to redo the cushions in the second stateroom. 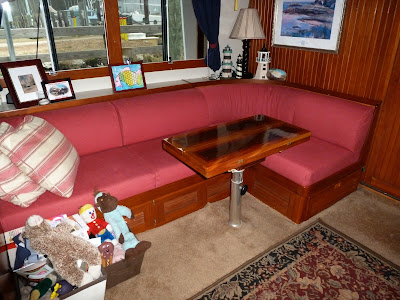 New cushion covers for the dinette, and 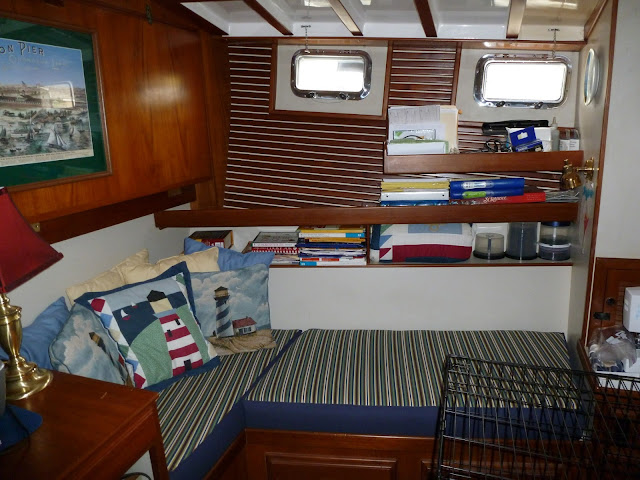 New covers for the second stateroom.  On the left wall behind the picture is a pullman bed.  To the right is Izzy's kennel (her security place).  The original cushion was one piece - a big L.  It was extremely difficult to lift it up to get to the storage underneath.  A fellow Krogenite we traveled with this summer in Maine (Carol Siegel on Carina) told me if I ever redid the cushion to cut it into two making for easier access to hidey holes below.  Good idea! 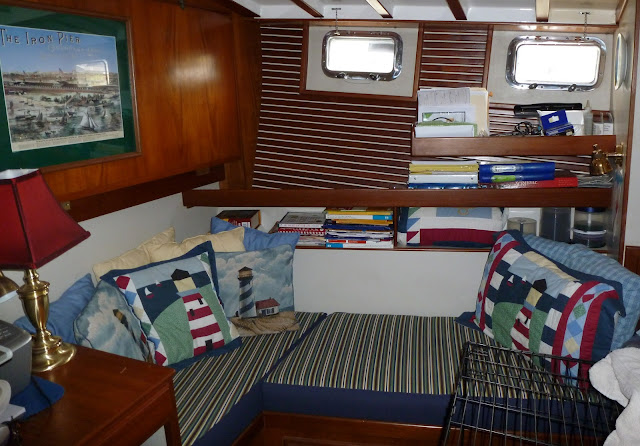 Still working out the pillow details. 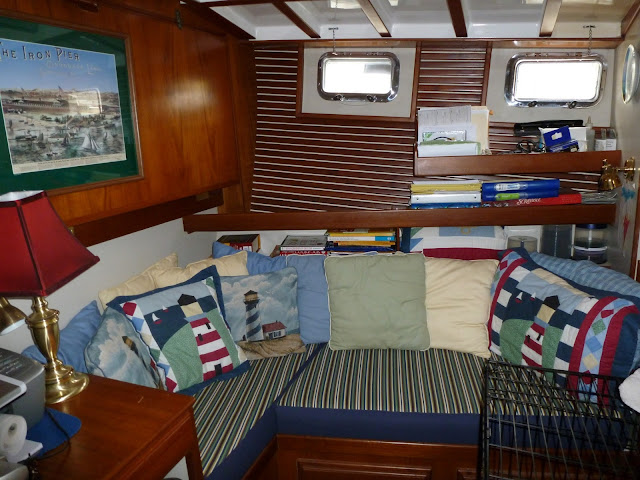 13 years of pillow collecting  - maybe time to give up a few - you should see OUR bed.  One good thing about this makeover is we got rid of one large garbage bag of "stuff" from just this room alone. 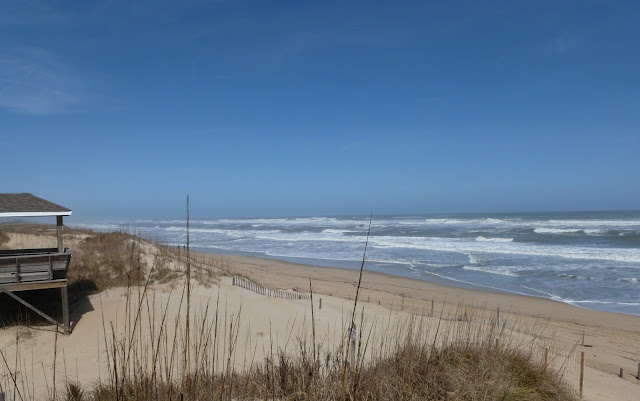 Last Sunday we decided to take a break and head to the seashore and points south (in the car).  Original plans were to maybe make Cape Hatteras.  Unfortunately due to the high tide and surf, the road south of the Oregon Inlet was closed (just south of Bodie Island Lighthouse). 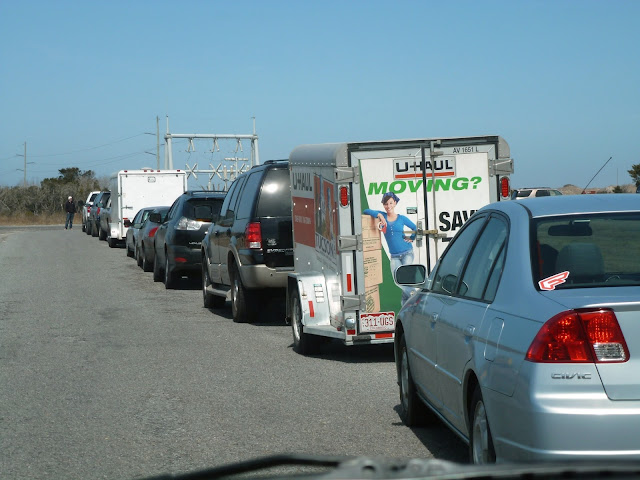 A string of cars  - most had been here since midnight waiting for a possible opening of the road at 1:30.  Not looking good - it is almost 2:00 and not a hint of movement.  So we turned around with a new plan to see the Wright Brothers Museum at Kitty Hawk (actually Kill Devil Hills). 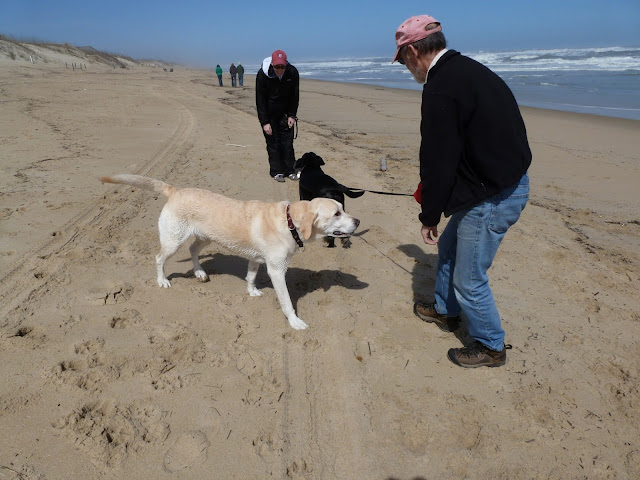 Izzy and Rick found a couple of friends on the beach at Nags Head.
As usual, Izzy is more interested in meeting people than other dogs. 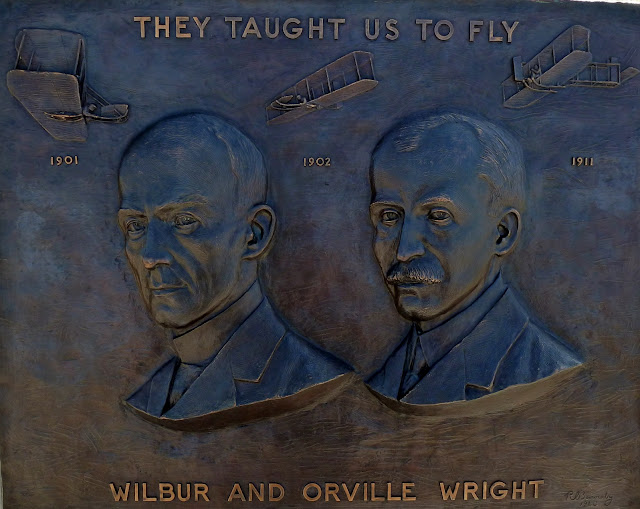 Then it was on to the Wright Brothers National Monument.  Lucky us, Rick has an "Old Age Pass" aka Golden Age Pass and this is a National Park - so yes, the whole carload gets in free and better yet, dogs are allowed on the grounds. 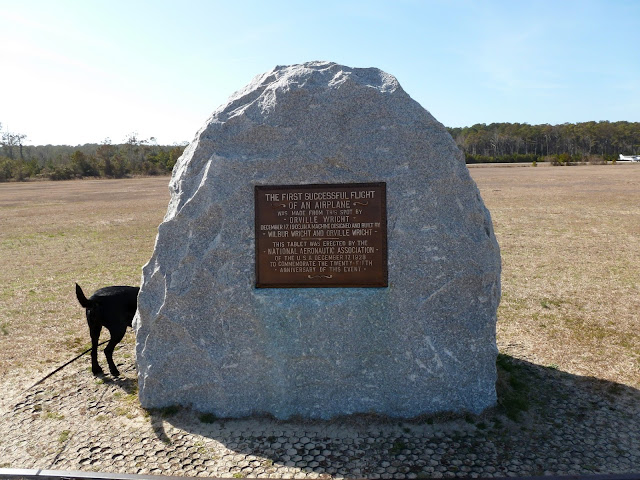 Izzy checking out all the pee spots on the rock. 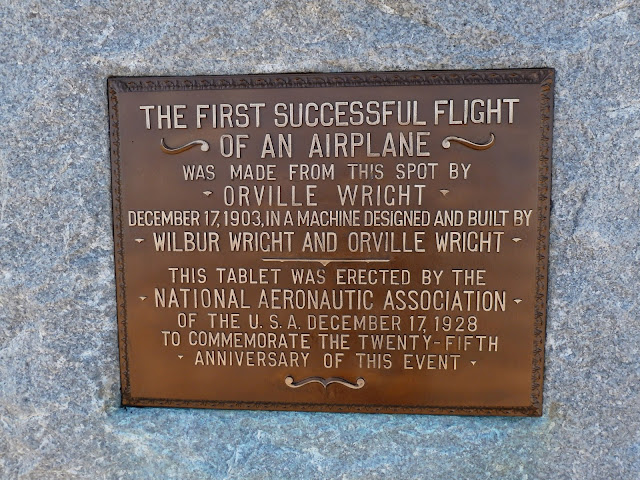 The plaque on the giant pee rock. 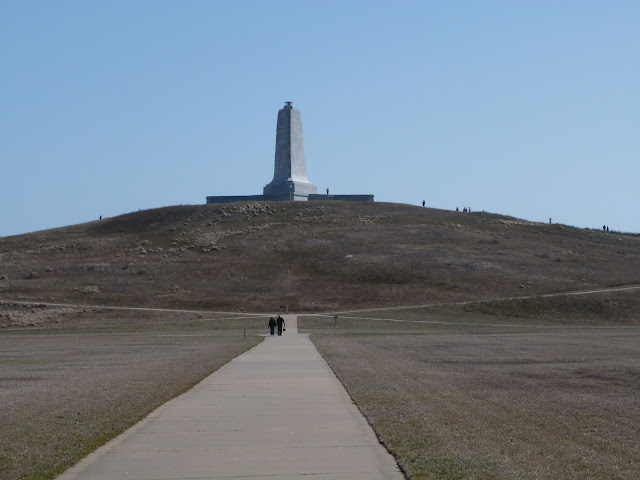 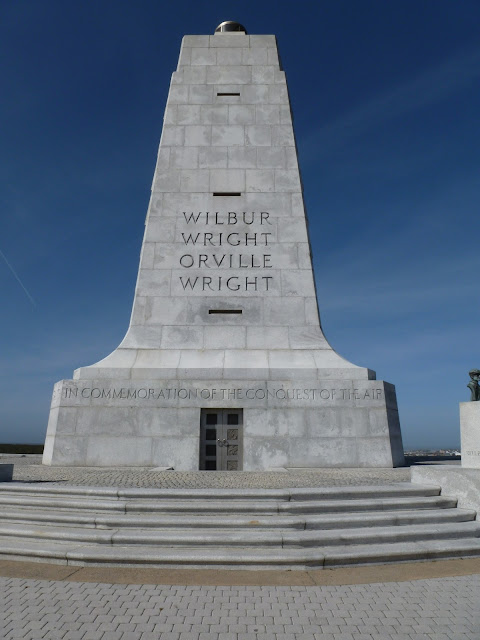 Ok, breaks over - back to boat chores. 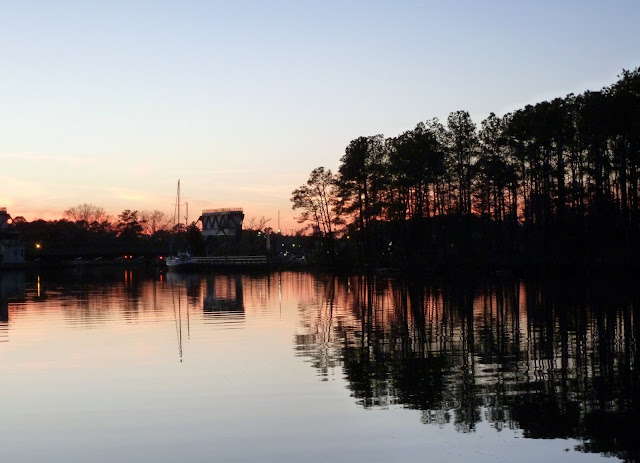 We have been treated to some beautiful sunsets and 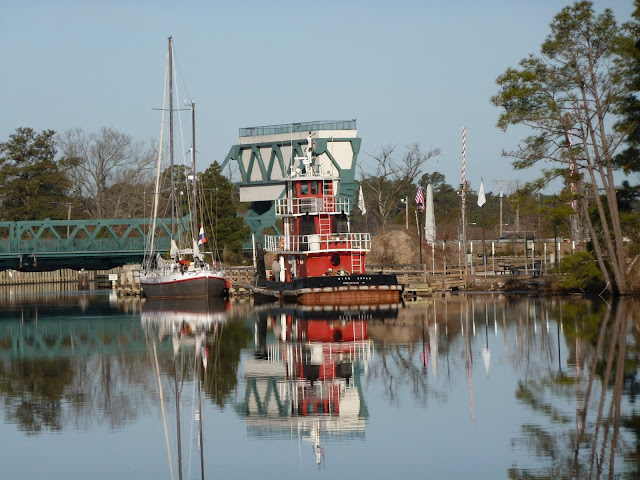 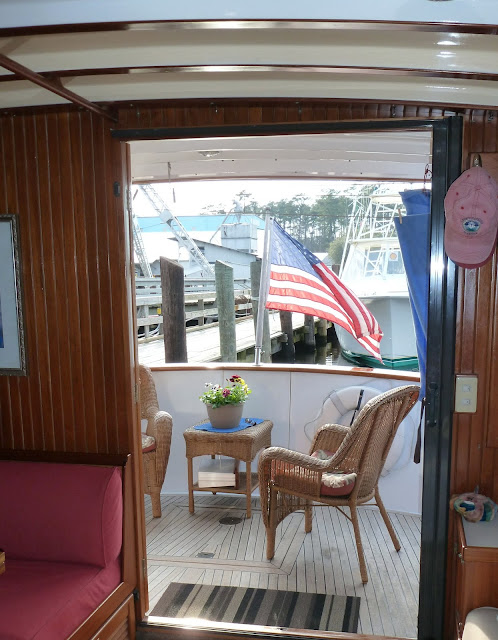 Yesterday was a perfect day - temps reached 70 degrees and we were able to have the doors open and happy hour on the back deck.  Just when I thought it couldn't get any better - 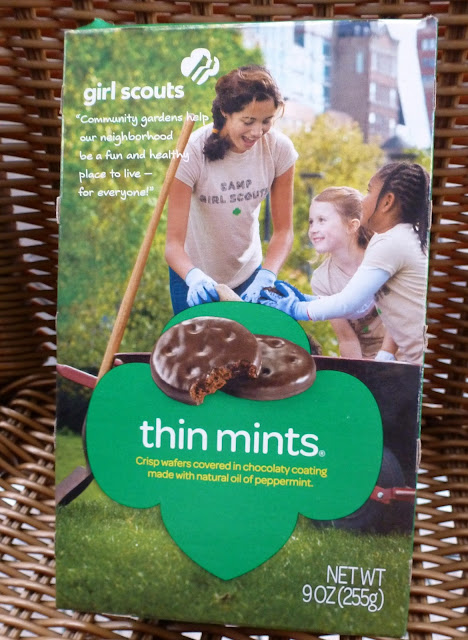 the Girl Scouts were selling my favorite cookie outside the grocery store.

LIFE IS GOOD
Posted by Rick, Deb and Izzy aboard M/V Broulee at 4:03 PM 4 comments:

Shiver Me Timbers and Blowin' In The Wind

The weather has been pretty decent this week, but another front is blasting thru today and tomorrow (same storm that dumped 9" of snow on our homestead in Minnesota). Predicting wind gusts to 50 MPH and temps cold enough to bring snow.  Hopefully this will be the last one. Strong winds started around 1:00.  Izzy thinks we are out on the high seas due to the rocking and rolling at the dock - she has been in deep hibernation mode for most of the day - she does not like waves.  As I type this she has come up from the safety of her kennel and has wedged herself between a pillow and my right hip.  She's trying.


Boat projects continue and yes, we are still speaking to each other.  I am learning to speak Martian and Rick is just hanging in there, trying his best to put up with a Venusian.  We are nearing completion of the Saloon, dinning table cushions and are very pleased with the finished product.  We  have new respect for the upholstery people and are beginning to see why they charge so much!  Very time consuming, to say the least. 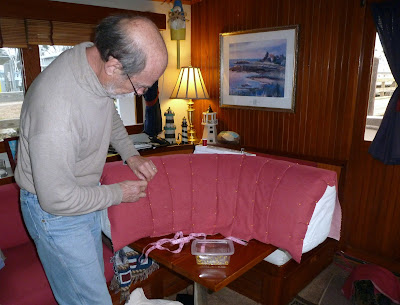 Curved cushion was a challenge - decided to go with a pleat method - will let you know if it works -after this one more cushion to go.


We are all enjoying our little cabin on the water, just a little bit warmer would be nice - this weekend is giving us promise.
Posted by Rick, Deb and Izzy aboard M/V Broulee at 6:05 PM 1 comment:

Last fall I entered my first photo contest.  It was the annual Kadey-Krogen Photo Contest.  I did not hear anything back from them so I figured my picture was not selected.  Rick was going thru some of his spam e-mails yesterday and for some reason an email from Kadey-Krogen  went to the spam bucket.  It was their Winter 2013 newsletter.  Rick downloaded the newsletter on his laptop and we scrolled thru it to the photo contest winners.  1st place went to a picture of a Krogen 48' in Venezula, 2nd place was a photo of a Krogen 48'  in the Bahamas and then scrolling down further - there it was - 3rd Place by Debra Smith a picture of Krogen 42'  in Seal Cove, Maine.  I am still in shock.  I was hopping for at least an honorable mention. 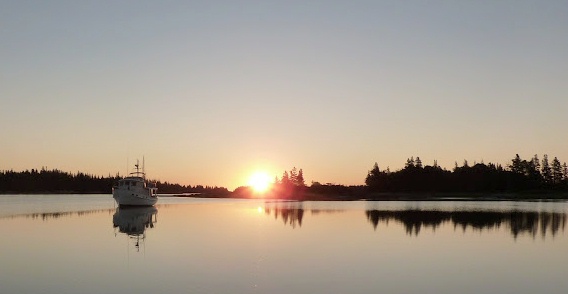